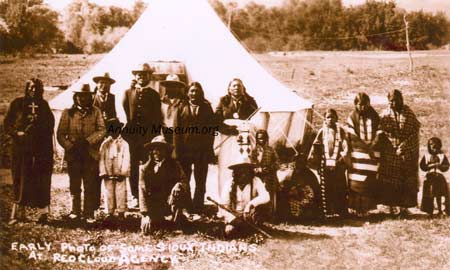 Early Photo of Some Sioux Indians at Red Cloud Agency. Red Cloud Agency was established in 1873 to issue rations and annuities to approximately 13,000 Sioux, Cheyenne, and Arapahoe Indians camped around the agency. It also served as a focal point for Indian grievances about the government and the encroaching white men. It is named after Chief Red Cloud (born 20 September 1822), one of the most important chiefs of both the Sioux and Cheyenne. Red Cloud Agency had a stormy past such as confrontations with cattle herders, theft, and even murders. These confrontations kept tensions high at the agency and in March 1874, the Sioux Expedition of 949 soldiers arrived to protect the agency from hostile attacks. The agency was relocated to the Pine Ridge Agency in the Dakota Territory after the death of Crazy Horse in 1877, and the treaty was signed that ceded the Black Hills to the U.S. in 1876.