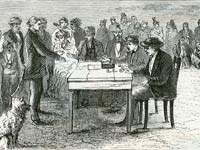 Annuities for American Indians
Features the use of annuities by the US government to purchase Native American lands during the 19th century. This article suggests that the exchange of lands for annuities was a one-sided transaction where Native Americans were deceived.

Acts of Parliament about Annuities
Provides a brief history of the printing and distribution of Acts of Parliament. In so doing, it offers insight into the scarcity and value of some of the antique documents in the collection, which date from 1702 to 1880.

Railroad Annuities
Describes the formation of the Railroad Retirement Board, a body responsible for delivering retirement annuities to railroad workers and their families in the US during the 1930s and 1940s.

History of Annuities
Reviews the evolution of annuities. This article starts with the earliest annuities, in Roman times, and takes you up to their use in the Great Depression.

Annuity and Insurance Advertisements
Highlights the early use of direct mail advertising for annuities and insurance in 1840s England, with examples of rare Mulready lettersheets and envelopes.

Annuity Certificates of the Bank of England
Presents a concise history of Bank of England annuities, a special type of government bond issued from the late 1600s through 1888 to finance wars, stipends for royalty, and major public projects.
© Annuity Museum: Unique collection of documents and memorabilia about annuities