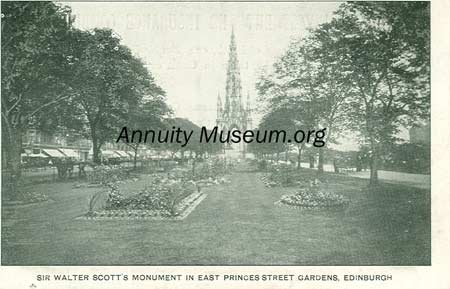 Sir Walter Scott's Monument in East Princes Street Garden, Edinburgh. Pension Investment and Insurance Combined. A Capital Sum in case of Death, or a Double Payment on reaching a given Age which may then be taken in Cash or by way of Pension or Annuity as may be preferred. Example:- Entering at Age 32, an Annual Contribution of 24 pounds, 10s. would secure 500 pounds payable at death if at any time before Age 60, or 1000 pounds on attaining that Age, which may then be taken in One Cash Payment or as a Pension or Annuity of 88 pounds, 5s. payable half-yearly during the remainder of life, according to current rates. If 65 were the Age selected the Annual Contribution would be only 19 pounds, 12s. 6d., and the Pension or Annuity would be 105 pounds. The Edinburgh Life Assurance Company. Head Office: 22 George Street, Edinburgh. Manager and Actuary - Archibald Hewat, F.F.A., F.I.A. 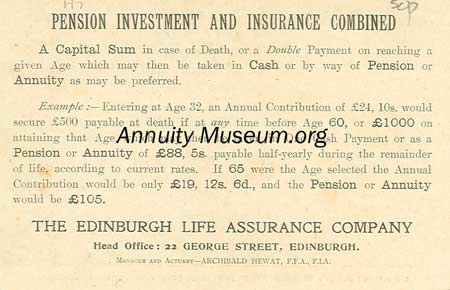