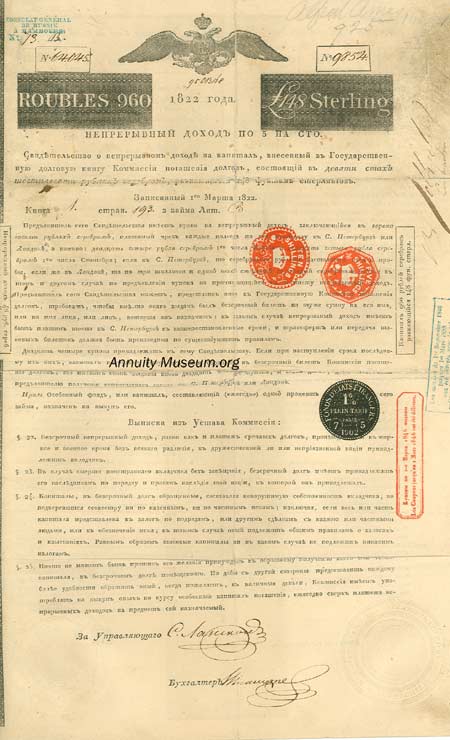 "Russian Annuity Bond signed by N.M. Rothschild. FIVE per Cent. ANNUITY. No 64045. ANNO 1822. No. 9854. Certificate of a perpetual Annuity in the Great Book of the Public Debt of the Imperial Commission of the Sinking Fund, representing a Capital of Nine Hundred and Sixty Silver Roubles, equal to L. stg. 148. Entered the 1st. March 1822. Book 1. Folio 193 2d. Series. Letter B. The bearer of this Certificate is entitled to an Annuity of Forty-eight Silver Roubles, payable half-yearly, at his option, in St.-Petersburg or London; namely, Twenty-four Silver Roubles on the first day of March, and Twenty-four Silver Roubles on the first day of September; if in St.-Petersburg, in Silver Roubles of the weight and standard now current; if in London, at the rate of three shillings and one penny sterling per Silver Rouble: in both instances, on presentation of the Dividend Warrants then due. The Bearer of this Certificate, on application to the Commission of the Sinking Fund, may cause it to be converted into an Inscription in the Great Book, in his own name, or that of any person or persons whom he shall designate; in which case the Dividends will he payable in St.-Petersburg only, at the periods above mentioned; and the transfer, or cession of such Inscription be made according to the existing Regulations. Twenty-four Dividend Warrants are hereunto attached; if, when the last becomes payable, the Capital has not been redeemed or inscribed in the Great Book, twenty-four similar Warrants will be issued, and so forward, and in such manner as to secure to the Holder of this Certificate the due payment of the Annuity in St.-Petersburg or London.
NB. A Special Fund of ONE per Cent, on the Amount of this Loan is appropriated for its redemption. Extract from the Regulations of the Commission. Chap. 2:
?. 22. The payment of the perpetual Annuity, as well as the payment of the outstanding Debts, will be effected in time of Peace, as well as in time of War, without distinction, whether the creditor belongs to a friendly or a hostile nation.
?. 23. If a Foreigner, proprietor of Inscriptions, dies intestate, the inscriptions shall pass to his heirs, in the order of succession established by the Laws of the Country of which he was a subject.
?. 24. The Capital placed in the Perpetual Debt being considered as an inviolable Property, sliall be exempt from sequestration, both for claims of the Crown and those of individuals, unless these Capitals, in whole or in part have been given in security for Contracts of provisions, or by any other Articles of Agreement, whether with the Crown or with private individuals, or for the purpose of bailing any claim; in which case they are subject to the general Laws, concerning mortgages and bails. These Capitals are likewise exempted in all cases from every Tax.
?. 25- No Person can be constrained to take back the whole or a part of the Capital placed in tlie Perpetual Debt. But to facilitate to the Proprietors of Inscriptions the means of converting them, when they desire it into ready money, the Commission will employ annually, for the purpose of repurchasing them, at the current price, a Capital of the Sinking Fund which shall be assigned beyond the Fund necessary for the Payment of the perpetual Interest.

This Russian bond from 1822 is widely recognized as the first Eurobond. Issued by the House of Rothschild in London, Frankfurt, Paris and Vienna, the bond promised payment in European currencies, as well as in Russian rubles. Perhaps more importantly, dividends could be claimed in any of the above cities -- effectively protecting the bondholder from the effects of a continental war -- if you are forced to flee the country, you can take your bonds with you to any one of four safe havens and expect payment! This is certified by none other than Nathan Rothschild -- one of the most famous investment bankers of all time. His signature appears on the upper right hand side of the bond. Missing from the bond are the original coupons -- they were all clipped and exchanged for payment. Although titled an annuity, the 1822 issue was a perpetuity -- a promise by Russia to pay a dividend to the bondholder forever -- or at least until the Revolution of 1917.

Nathan Mayer Rothschild (1777-1836) founded the British branch of the Rothschild banking house in London in 1805 and became the first Jew admitted to the House of Lords. He took a leading part in managing and financing the subsidies that the British government transferred to its allies during the Napoleonic Wars. Nathan Mayer's eldest son, Lionel Nathan Rothschild (1808-79), who succeeded him as manager of the London branch, financed the British government's purchase of a controlling interest in the Suez Canal in 1875. Lionel Nathan also became the first Jewish member of the British Parliament. Lionel's son, Sir Nathan Mayer, 1st Baron Rothschild (1840-1915), was a member of Parliament and, in 1855, was created the first Jewish peer in Great Britain. The Rothschild banking house in London continued under the management of Lionel de Rothschild (1882-1942) and Anthony Gustav de Rothschild (1887-1961), both great-great-grandsons of Mayer Amschel. The London branch remains today an important banking establishment among Western nations." 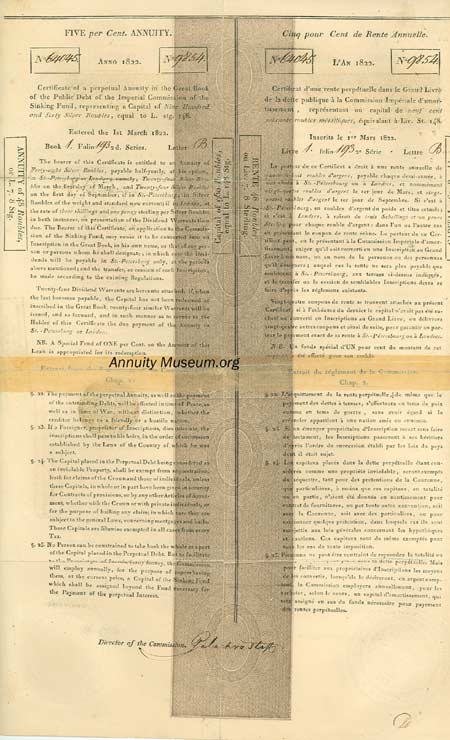