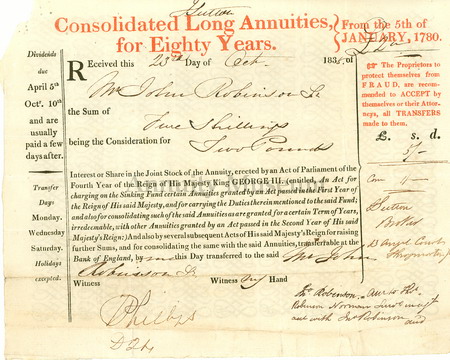 Received this 23rd Day of Oct 1835 of Mr. John Robinson Sr. the Sum of Five Shillings being the Consideration for Two Pounds. Interest or Share in the Joint Stock of the Annuity, erected by an Act of Parliament of the Fourth Year of the Reign of His Majesty King GEORGE III. (entitled, An Act for charging on the Sinking Fund certain Annuities granted by an Act passed in the First Year of the Reign of His said Majesty, and for carrying the Duties therein mentioned to the said Fund; and also for consolidating such of the said Annuities as are granted for a certain Term of Years, irredeemable, with other Annuities granted by an Act passed in the Second Year of His said Majesty's Reign :) And also by several subsequent Acts of His said Majesty's Reign for raising further Sums, and for consolidating the same with the said Annuities, transferrable at the Bank of England, by this Day transferred to the said Mr. John Robinson Sr.