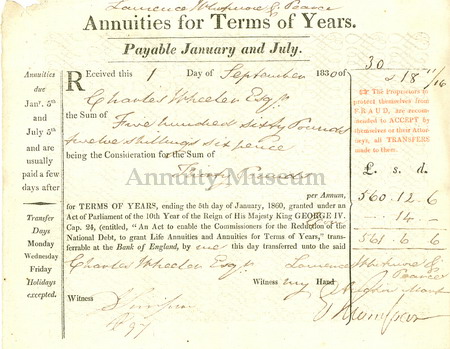 Received this 1 Day of September 1830 of Charles Wheeler Esq the Sum of Five hundred sixty pounds twelve shillings six pence being the Consideration for the Sum of Thirty pounds for TERMS OF YEARS, ending the 5th day of January, 1860 granted under an Act of Parliament of the 10th Year of the Reign of His Majesty King GEORGE IV. Cap.24, (entitled, "An Act to enable the Commissioners for the Reduction of the National Debt, to grant Life Annuities and Annuities for Terms of Years," transferrable at the Bank of England, by me this day transferred unto the said Charles Wheeler.