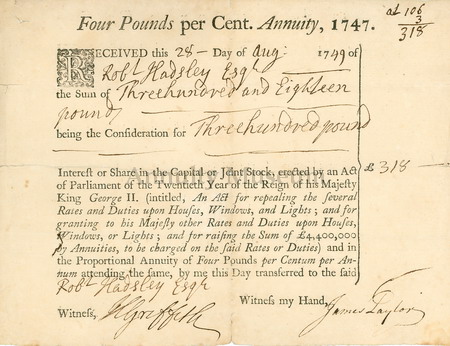 Received this 28 Day of Aug 1749 of Rob Hadsley Esq the Sum of Threehundred and Eighteen pounds being the Consideration for Three hundred pounds Interest or Share in the Capital or Joint Stock, erected by an Act of Parliament of the Twentieth Year of the Reign of his Majesty King George II. (intitled, An Act for repealing the several Rates and Duties upon Houfes, Windows, and Lights; and for granting to his Majesty other Rates and Duties upton Houfes, Windows, or Lights; and for faifing the Sum of 4,400,000 by Annuities, to be charged on the said Rates or Duties) and in the Proportional Annuity of Four Pounds per Centum per Annum attending the fame, by me this Day transferred to the said Rob Hadsley Esq