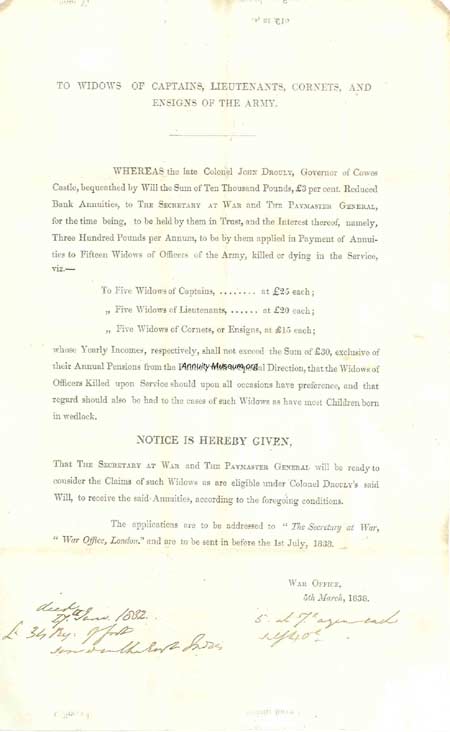 Letter Regarding Annuities to Widows of Captains, Lieutenants, Cornets, and Ensigns of the Army.

"On Her Majesty's Service. Mrs. Wilson Widow of L Wilson. To Widows of Captains, Lieutenants, Cornets, and Ensigns of the Army. Whereas the late Colonel John Drouly, Governor of Cowes Castle, bequeathed by Will the Sum of Ten Thousand Pounds, (L)3 per cent. Reduced Bank Annuities, to The Secretary at War and The Paymaster General, for the time being, to be held by them in Trust, and the Interest thereof, namely, Three Hundred Pounds per Annum, to be by them applied in Payment of Annuities to Fifteen Widows of Officers of the Army, killed or dying in the Service, viz.- To Five Widows of Captains,........ at (L)25 each; " Five Widows of Lieutenants,..... at (L)20 each; " Five Widows of Cornets, or Ensigns, at (L)15 each; whose Yearly Incomes, respectively, shall not excees the Sum of (L)30, exclusive of their Annual Pensions from the Public; with a Special Direction, that the Widows of Officers Killed upon Service should upon all occasions have preference, and that regard should also be had to the cases of such Widows as have most Children born in wedlock. Notice is hereby given, That The Secretary At War and The Paymaster General will be ready to consider the Claims of such Widows as are eligible under Colonel Drouly's said Will, to receive the said Annuities, according to the foregoing conditions. The applications are to be addressed to "The Secretary at War, "War Office, London." and are to be sent in before the 1st July, 1838. War Office, 5th March, 1838. Died 27th June 1832. L. 34 Rg: of foot......India." 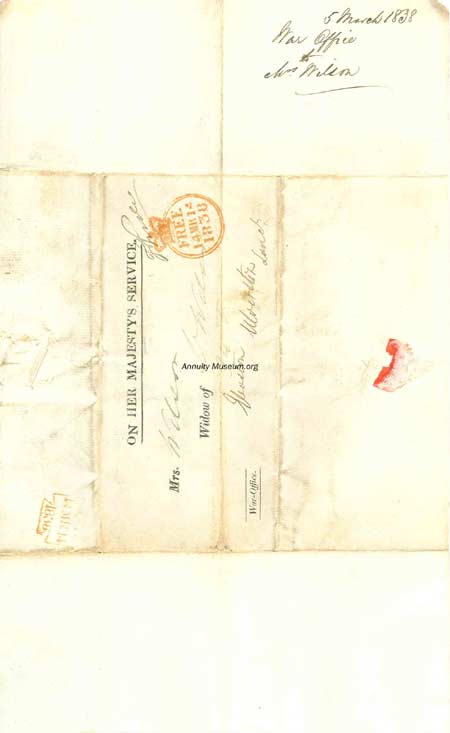