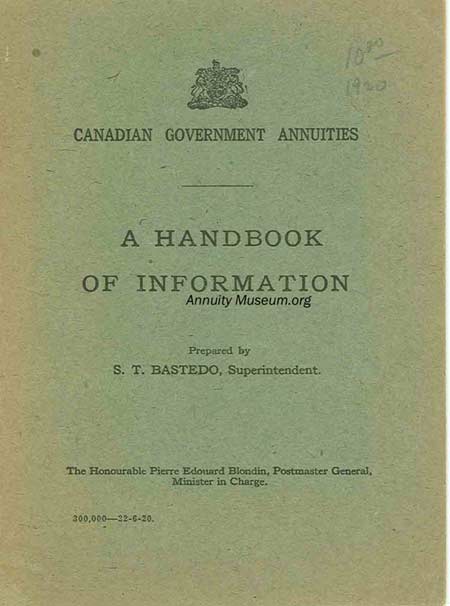 Canadian Government Annuities - A Handbook of Information. 24 page handbook of information concerning Canadian government annuities "Prepared by S.T. Bastedo, Superintendent, the Honourable Pierre Edouard Blondin Postmaster Minister in Charge." "Any male or female resident in Canada of 5 years of age or over may purchase a Canadian government annuity of from $50 to $5,000 to being three months from the date of purchase, or at any later date desired." 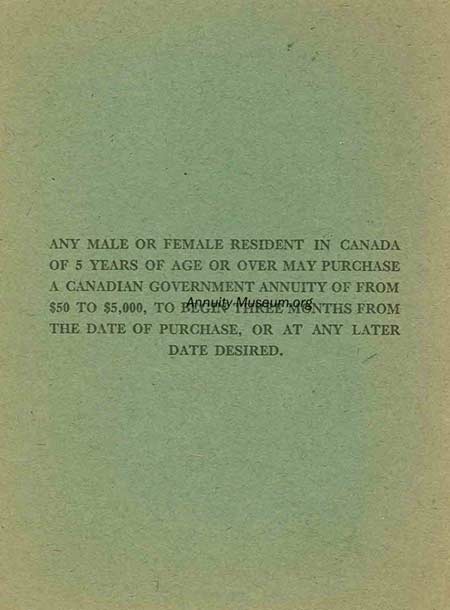 The Canadian Government Annuities Act of 1908 was among the first attempts at social legislation in Canada. By the turn of the century, the governments of many other industrialized countries had become convinced that the elderly poor should receive special assistance. Although many Canadian social reformers called for a national old age pension, the Dominion government adopted instead a program of Government Annuities in 1908. Its purpose was to encourage Canadians to prepare financially for their retirement. Government Annuities were purchased either by individuals or by employers as pension plans for their registered employees. The problem, however, was that few Canadians could afford to buy them.

The creation of the Annuities program changed little. It would be nearly twenty years before the first meaningful step was taken towards replacing grudging charity for impoverished seniors with an acknowledgement of the right of older citizens to a minimum level of support from society. By the 1960's, other social benefit plans, such as Old Age Security and the Canada Pension Plan were introduced and began gaining importance in providing Canadians with basic retirement income. The growth of these other social security programs as well as the private sector brought about the decision to disband the Annuities sales force. In 1975, an Act of Parliament formally ended the sale of Government Annuities, which were never widely popular in the first place. Employers, however, could register new employees under group contracts until 1979.

The Annuities Branch of the Canadian government continues to administer contracts under payment and those due to become payable, on behalf of clients from across Canada and around the world.