Letter regarding annuity from HHH Hungerford, Esq. from the Cocoa Tree, London. London Cocoa Tree '? Wednesday '? My dear '? I received your letter from my Brother '?I perfectly agree with your ideas upon the subject '? At the time I borrowed the'?I thought that possibly in a year or two I should pay it off out of my own resources'?to remain as it is, it is most likely this'?the case'?as it might suit me to delay the payment for a longer period than I at first intended, I am desirous of moderating the'?as far as possible - It is certainly not worth my while to make any change'?the Interest is reduced 2 or 3 per Ct. '? as I am aware the'?attending that change would amount to something '? But I think with you that he'?would not object to reduce his interest '? if it is suggested to him that I can'?the same money at 15 per Ct. '? exclusive of course of the Insurance '? I should say that if, instead of paying'?per annum the Interest has reduced to 380 '? or in a pinch'?know whether he'?object to my paying off any part of this Principal supposing I could do so in November or afterwards because this is worthy of Consideration, indeed one of my reasons for changing Creditors, was on the Supposition that I should'?him enabled to reduce the Sum borrowed to 3000 instead of 5000£ - this'?upon the circumstance of that might be granted'?also when it might be tangible '? I certainly find it an annoyance paying such an enormous interest in these'?times. I shall rely on your sagacity for'?- I am going out of town for a day or two '? but can get my letters from the Cocoa Tree'?If'?come to terms '? I think I shall make this exchange'?inform me of the result of your conference. Yours truly, HHH Hungerford. 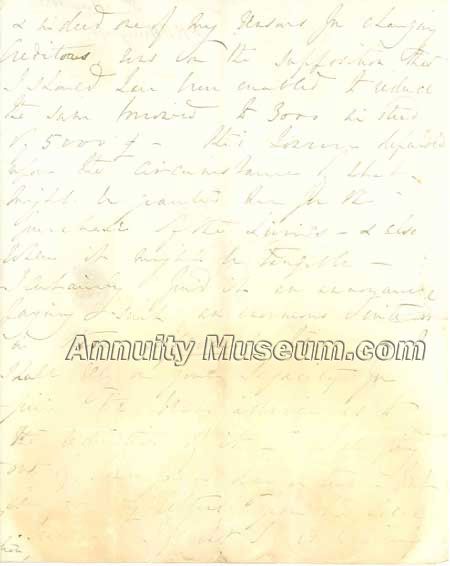 The Cocoa Tree Coffee House was built about 1700. It was located at 64 St. James Street and was originally called Will's Cocoa House, after its first owner. This coffee house became exclusive because of the political character that it developed. For a time it was favored by Jacobites, but such prominent non-Jacobites as the Prince of Wales, later George IV, Walpole, and Joseph Addison also patronized the Cocoa Tree. Its name came not from the beverages it provided, but from an iron tube, designed to support joists, that ran through the building from the cellar through the floor of the main level. This tube was encased in wood and carved with palm leaves, which resembled the leaves of a cocoa tree.

Some notorious duels were fought at the Cocoa Tree, notably over the actress Mrs. Hartley. This resulted in members having to leave their swords in the front entrance hall.