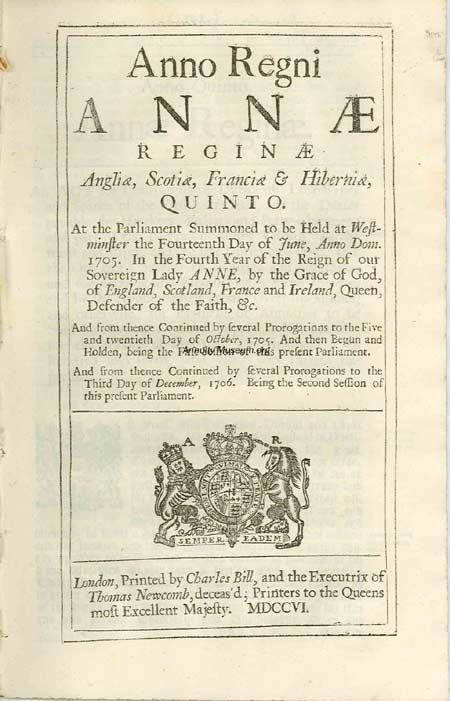 An Act for Continuing the Duties on Low-Wines and Spirits of the First Extraction, and the Duties payable by Hawkers, Pedlars and Petty-Chapmen, and part of the Duties on Stampt Vellum, Parchment and Paper, and the late Duties on Sweets, and the One this Subsidy of Tonnage and Poundage, and for Settling and Establishing a Fund thereby, and by the Application of certain Overplus-Monies, and otherwise, for Payment of Annuities to be Sold for Raising a further Supply to Her Majesty, for the Service of the Year One thousand seven hundred and seven, and other Uses therein Expressed. At the Parliament Summoned to be Held at Westminster the Fourteenth Day of June, Anno Dom. 1705. In the Fourth Year of the Reign of our Sovereign Lady Anne, by the Grace of God, of England, Scotland, France and Ireland, Queen, Defender of the Faith, etc. And from thence Continued by several Prorogations to the Five and twentieth Day of October, 1705. And then Begun and Holden, being the First Session of this present Parliament. And from thence Continued by several Prorogations to the Third Day of December, 1706. Being the Second Session of this present Parliament. 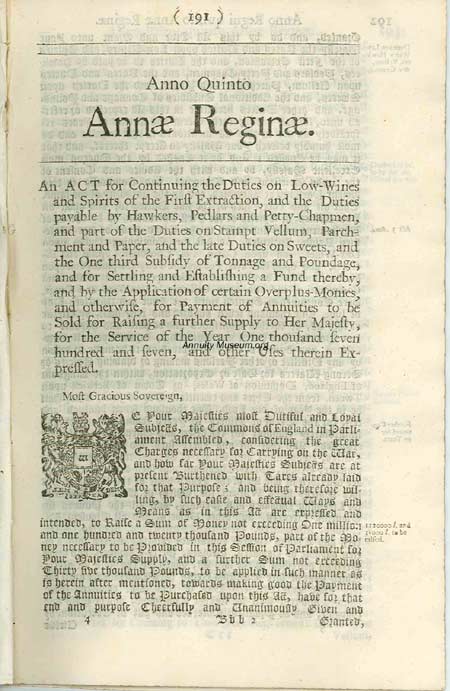