An Act for granting to His Majesty several Rates and Duties upon Indentures, Leases, Bonds, and other Deed; and upon News Papers, Advertisements, and Almanacks; and upon Licences for retailing Wine; and upon Coals exported to Foreign Parts; and for applying, from a certain Time, the Sums of Money arising from the Surplus of the Duties on Licences for retailing Spiritous Liquors; and for raising the Sum of Three Millions, by Annuities, to be charged on the said Rates, Duties, and Sums of Money; and for making perpetual an Act made in the Second Year of the Reign of His present Majesty, intituled, An Act for the better Regulation of Attornies and Solicitors; and for enlarging the Time for Filing Affidavits of the Execution of Contracts of Clerks to Attornies And Solicitors; and also the Time for Payment of the Duties omitted to be paid for the Indentures and Contracts of Clerks and Apprentices. At the Parliament begun and holden at Westminster, the Thirty first Day of May, Anno Dom. 1754, in the Twenty seventh Year of the Reign of our Sovereign Lord George the Second, by the Grace of God, of Great Britain, France, and Ireland, King, Defender of the Faith, etc. And from thence continued by several Prorogations to the Second Day of December, 1756, being the Fourth Session of this present Parliament. 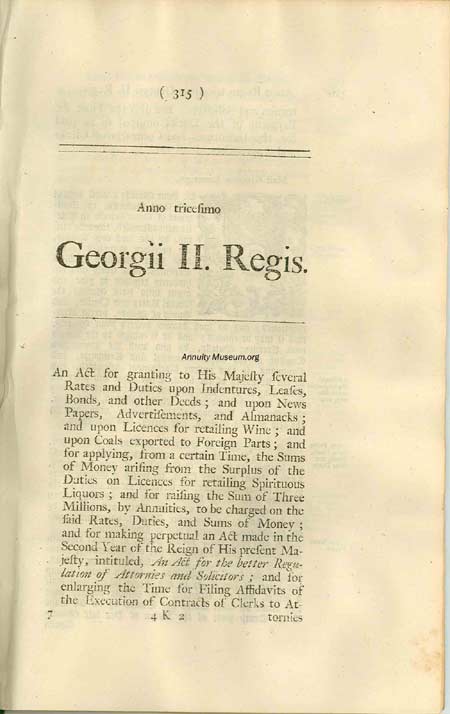