What is an Annuity Rate? 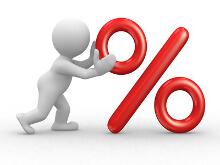 How do you know which annuity rates you find on the internet are the best for what you have in mind as you plan your retirement?

The answer is there's no way to compare the different annuity rates you find on the internet unless you understand the six main types of annuities these rates are advertising. This article summarizes the main features and drawbacks of each of these annuities.

To start, it's important you know that each type of annuity described below can be further separated into two categories; fixed and variable.

By “fixed” annuity we mean that your premium (or investment) compounds at a fixed or stated interest rate; by “variable” annuity we mean your investment can increase or decrease in value based on the performance of an underlying mutual fund account.

If you'd like to see an annuity calculation, simply enter your age, income start date, and amount to invest, in our Annuity Quote Calculator, and click the Get My Quote button. Your quote will appear instantly on the next page.

Fixed immediate annuities typically offer you a ‘fixed’ income stream for the duration of your lifetime by paying you some of your original principal plus earned interest each month. This type of annuity is designed to produce income by liquidating the principal during the annuity owner’s lifetime. The amount of each monthly payment from an immediate annuity is typically greater than the amount withdrawn from other types of annuities because in those annuities you are only receiving the interest earned from the investment (and leaving the principal of that investment intact). Whereas, from the immediate annuity, you receive a portion of the underlying investment, also.

Immediate annuity income streams can be set up to pay out for a limited or specified period of time, for your lifetime, for you and your spouse’s lifetimes, or any combination of the above. And, the income stream can be delivered monthly, quarterly, semi-annually, or annually dependent upon your financial needs.

Annuity rates offered for immediate annuities will vary based upon age, gender and the type of payout stream selected. Keep in mind, when you receive an immediate annuity quote, the figures will express how much income you will receive over the chosen time frame or period, not the underlying rate of return your investment will earn.

A deferred fixed annuity works similarly to a bank certificate of deposit (CD), but it is not covered by FDIC. These annuities are offered by insurance companies and their rates are quoted as an “Effective Annual Yield.” You will be given the option to choose the guaranteed income period, typically between three and ten years. In most cases, you will be offered a higher annuity rate for holding your contract in place for a longer period. So, to distinguish deferred annuities from immediate annuities, we have that deferred annuity rates are based largely on the length of the period you are holding the annuity for whereas immediate annuity rates are based on your age, gender, and the selected time frame over which you receive payments (which can be as short as five years or as long as you and your spouse’s life expectancies).

Just bought my first SMA and was very happy to have gone through Immediate Annuities.com. I found them in an article in the Wall Street Journal. As a first time buyer, I had a lot of questions. But to their credit, they did a great job answering my questions directly or getting the right answers from the right people when they needed to.

Deferred Income Annuities (DIAs) combine features of both the immediate annuity and the deferred fixed annuity previously discussed. If you want to create guaranteed income for a later date consider a DIA. Deferred income annuities combine the investment growth period offered by the deferred annuity with a selected income period as with the immediate annuity. The investment growth period options vary between three and thirty years depending upon the insurance company receiving quotes from. When you receive a deferred income annuity quote, you will be provided with the income stream’s start date and the ability to select designated beneficiaries. The quote received will not state the underlying investment return but the annuity’s deferral period, your chosen income stream option, the estimated monthly or annual income stream and the date in which this income stream will begin. It is important to note that if you die during the selected growth period, your beneficiaries may not be guaranteed to receive your investment. Be sure to read the features of the annuity contract quoted.

From time to time, the owner of an immediate annuity may opt to sell their future income stream for an immediate lump sum payout. When such a pre-owned annuity is available for purchase we call that a Secondary Market Annuity (SMA).

Annuity rates for secondary market annuities are often based on the interest rates in effect at the time the original annuity was created. For example, if interest rates were 7% in 2000 and an immediate annuity issued in 2000 were to become available for purchase today, the annuity rate quoted for such an SMA would be 7%, regardless of whether current interest rates are higher or lower. Please keep in mind, that as with immediate annuities, the annuity rate quoted on an SMA should not be confused with that annuity’s payout rate (which is usually higher since it includes the principal portion of the payment received in the calculation of “payout” rate).

Fixed index annuities share similar features with fixed deferred annuities; however, their annual growth is tied to a benchmark stock index versus a fixed rate of return. An index annuity’s growth rate is subject to rate floors and caps, meaning they will not exceed or fall below specified returns even if the underlying indexes fluctuate outside the set parameters. In simplest terms, the insurance companies bear the risk of a sharp stock market decline with this type of annuity. The spread between the floor and caps typically ranges between three and seven percent and will vary based upon the insurance companies offering quotes.

Variable annuities do not offer fixed rates of return. The performance of these annuities is directly tied to the market returns of the investment sub-accounts selected. Think of a sub-account as individual stocks or mutual funds. Their value will fluctuate based upon current market conditions, meaning your investment growth is dependent upon the sub-accounts selected. When you receive a quote or illustration for a variable annuity it will be expressed as hypothetical rather than guaranteed which is only true for fixed annuities.