With all of my discussions of annuities lately, it is worthwhile to also consider the sensitivity of annuity pricing to interest rates, gender and age-related mortality factors.

Figure 1 estimates the relationship between annuity payout rates and interest rates for 65-year old males, females, and opposite-gender couples with a joint and 100% survivors annuity. All of the following figures also assume no additional overhead costs are deducted, which appears to be the case in the current pricing environment. 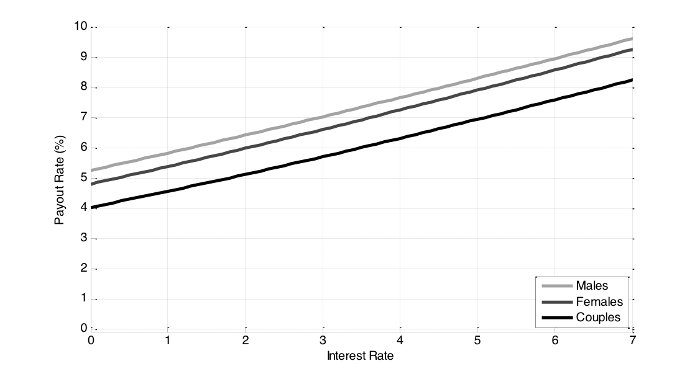 I was hesitant at first to buy an annuity on the internet. Once I got your quote report and read your reviews I was happy I found your website. Your phone reps were always very helpful. You made the whole thing go really simple. Thank you guys!

The higher interest rate assumptions for females and couples make sense. Since they live longer, more of their payments will be further in the future. This way, the insurance company can focus on the longer-end of the yield curve. While I cannot consider all of the factors insurance companies use to adjust their interest-rate and mortality-rate assumptions (insurance companies don’t like sharing this information), these seem to be reasonable estimates for actual annuity payout rates. Overhead costs appear to be quite slim these days, at least for the best price quotes offered in the marketplace.

A similar story can be seen with females and couples, where a 1% increase in interest rates generally raises payout rates by about 0.6% to 0.65%. This is a fairly consistent relationship and one which must be kept in mind when we consider whether it is wise to wait for interest rates to rise before purchasing an income annuity. Interest is only one of the factors determining payout rates, so payout rates will not rise equally with interest rates. Return of principal and mortality credits are also important.

Before shifting to the next important factor for pricing, I want to take a moment to re-express the numbers in Figure 1 in a slightly different way. The reciprocal of the payout rate is the cost of purchasing a dollar of lifetime income. For some readers, this may be more intuitive, and it also provides a better match when thinking about the prices from Blackrock’s CoRI indices. Figure 2 shows these costs.

Figure 2: Relationship Between the Cost of Purchasing $1 of Lifetime Income and Interest Rates, 65-Year-Olds 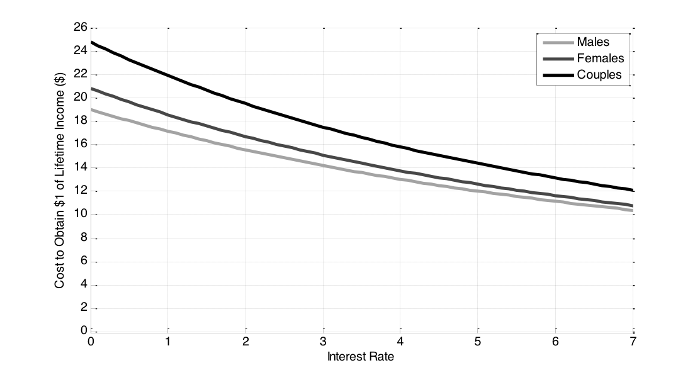 Relationship Between Payout Rates and Age 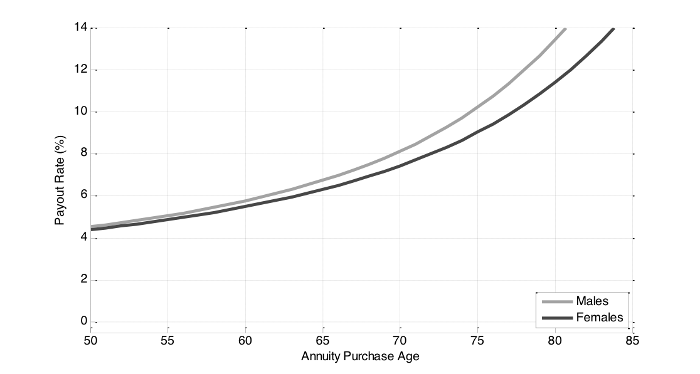 Figure 4 repeats this analysis to show how the cost of one dollar of lifetime income relates to the age it is purchased. The cost decreases with age because every year someone lives before purchasing an income annuity is another year income does not have to be paid. However, the cost does not reduce by one dollar per year. Life expectancy does not reduce on a one-to-one basis as people continue to live, not to mention that premiums will have less time to grow as the purchase is delayed. On average, over this 35-year period, delaying the starting age by one year reduces the cost per one dollar of income by 47 cents for males and 46 cents for females.

Figure 4: Relationship Between the Cost of Purchasing One Dollar of Lifetime Income and Purchase Age, 2.5% Interest Rate 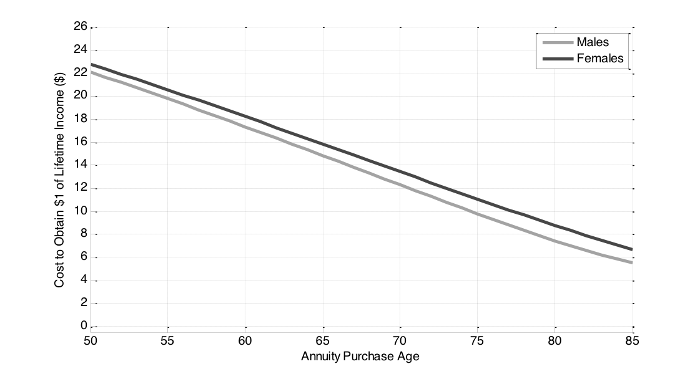 Wade Pfau: Professor at The American College and Principal at McLean Asset Management. His website: www.RetirementResearcher.com