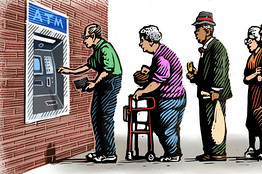 Conventional wisdom usually advises older investors and retirees to balance a portfolio of bonds, stocks and annuities to squeeze the most from their savings during the third stage of life.

But recent events on Wall Street and in Washington, including a booming stock market and Federal Reserve warnings about "tapering" its easy-money policy, suggest those investors may need to junk conventional wisdom and think again.

Stocks may be too expensive, while bonds are likely to fall as the Fed pulls back and interest rates rise.

The best asset for many investors right now may simply be cash—money-market funds or short-term certificates of deposit. That's especially true for retirees, who rely on their low-risk investments for both income and capital preservation.

The stock market has been hitting new highs, amid growing hopes that the economy is rebounding from the long slump. Last week the Dow Jones Industrial Average closed near its all-time high, set July 23. Likewise, the S&P 500 index was just 0.2% below its record; investors are sitting on thumping gains of 18.6% since the start of the year.

But rising stock prices produce risks as well as gains. At current levels, U.S. stocks offer a paltry dividend yield of just about 2.1% — meaning a retiree investing $100,000 in the S&P 500 will earn just $2,100 a year in dividends.

Stock prices are now at very high levels compared with average corporate earnings for the preceding decade, or compared with the replacement cost of corporate assets—two indicators that many economists note have in the past been very good predictors of stock-market returns. When shares have been this expensive on such measures in the past, they have usually turned out to be a poor investment.

The interest rates on bonds have picked up from the historic lows seen earlier this year, but they remain very low by long-term standards.

The 10-year Treasury note offers a yield of just 2.5%, and the Barclays index of corporate bonds isn't much better at 3.2%. Inflation-protected Treasury bonds are so expensive they offer a guaranteed loss of purchasing power for the next seven years.

The picture is little better for immediate annuities, insurance products that allow retirees to convert a lump sum into a guaranteed income stream for life. According to Hersh Stern, an industry expert and the head of ImmediateAnnuities.com, a comparison website, payout rates on annuities remain little improved on the record lows seen a few months ago.

"There are no historical periods in the United States where comparable low bond yields and high equity valuations have occurred simultaneously," they wrote in a recent paper.

The problem, they say, is that most retirement planning ignores market valuations. As a result, it may offer a misleading guide to investors today. By their calculations, investors today who hold a typical conservative portfolio of 40% stocks and 60% bonds cannot safely rely on withdrawing 4% a year and still making their portfolio last 30 years. They believe such investors run a 50% chance of running out of money before they die.

Recent research by Jack Vanderhei at the nonprofit Employee Benefit Research Institute found comparably sobering concerns. Current low interest rates, he says, will make it tough for many baby boomers and members of Generation X to meet their retirement-income needs from their savings.

The good news, however, is that no one is required to commit their money to stocks, bonds and annuities at current valuations—and there are plenty of signs that, for those willing to sit on the sidelines and be patient, the situation is likely to improve.

Today's interest rates are artificially low as a direct result of the actions of the Federal Reserve. The central bank has tried to stimulate the recovery of the economy by forcing interest rates down.

Fed Chairman Ben Bernanke announced in the spring that such policies will be coming to an end, although questions remain about timing. Many economists think the Fed may start "tapering," or winding down, as early as September.

Such actions are likely to lead to interest rates returning over time to more "normal" levels. No one knows for certain when that will happen or exactly where interest rates will end up. But many economists, based on history and current expectations for inflation, suggest rates on 10-year Treasury notes may return to 4% or even higher, and interest rates on other bonds—such as corporate debt and longer-term government bonds—may go higher still.

If that should happen, investors who own bonds today will lose money as bond prices will fall. Those who own cash will get the benefit of higher rates.

The situation will be similar for those who wait to buy annuities. As Mr. Stern points out, annuities are constructed by insurance companies using bonds as "raw materials."

The higher the interest rates in the bond market when you purchase an annuity, the better the income your annuity will pay. Those who buy annuities today are locking in returns from today's bond market. The chairman of the Federal Reserve has all but promised that the interest rates from bonds—and therefore from annuities—will be higher in due course.

The stock market remains harder to predict, as ever. But much of the boom in the market has been fueled by the Fed's easy-money policy.

When that policy ends, it isn't hard to see a reaction on Wall Street. Stocks with a dividend yield of 2.1% may seem attractive at a time when five-year Treasury bonds yield only 1.3%.

Will they seem quite as attractive as Treasury bonds start to yield 3% or more? Or will stocks have to fall to remain competitive?