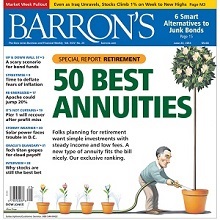 Insurance companies have a long history of conjuring up new types of annuities to suit changing market conditions, and once again they've proved to be the masters of reinvention. Their latest brainchild: the deferred-income annuity, which has seen explosive growth since it was introduced three years ago, thanks mainly to its simplicity. You put money into the annuity, and then, two to 40 years later, you can activate a stream of income that is guaranteed to last a lifetime -- even if you live to 100 or beyond. The great thing about it is that when you put money in, you know exactly how much you will get at age 65, 70, 80, or whenever you turn on your income.

Since New York Life introduced a deferred-income annuity in 2011, at least eight other insurers have jumped in with similar products, causing sales to more than double last year to $2.2 billion. That's a tiny fraction of the total $220 billion annuity industry, but a mighty spark when you consider that sales of its bread-and-butter product -- the variable annuity -- have slumped two years in a row and are 20% below their 2007 high.

Broadly speaking, the trend in annuities has been toward simpler products since interest rates have remained stubbornly low in recent years. Insurers invest underlying assets in fixed-income investments, so lower rates have made it more challenging to maintain capital reserves to cover annuity guarantees. The simpler the product, the easier it is to manage from a risk standpoint.

To help spotlight the best options in the changing landscape, Barron's narrowed the vast universe of annuity products to 50 of the most competitive contracts, and used basic assumptions, such as an investor's age and the size of the investment. The top-50 list is divided by annuity type, and includes only contracts offered by insurance companies with a rating of A- or higher from A.M. Best, which assesses insurers' financial soundness.

Overall, rates, fees, and payouts have improved over last year's levels for both fixed and variable annuities. Fixed annuities are principal-protected contracts with underlying fixed-rate investments. They can be structured as income annuities or to accumulate assets like a certificate of deposit.

THE FIXED ANNUITIES on our top-50 list feature contracts with the highest guaranteed lifelong income or the highest interest rates.

The biggest seller in this category is the fixed-index annuity, which guarantees a set rate return on the downside and a market-linked return on the upside. While underlying assets are invested in fixed securities, insurers buy options on the index that the contract is pegged to, typically the Standard & Poor's 500. If the options do well, investors get some of the index's upside, up to a cap, which these days is about 4%.

Barron's list includes only fixed-index annuities with income riders, which guarantee future lifelong income, because they are more easily sized up by investors. "You can look at the guaranteed income and know what you're getting," says Hersh Stern, founder of ImmediateAnnuities.com, a source of data on fixed annuities.

In contrast, with plain-vanilla fixed-index annuities, it's hard for investors -- and even advisors -- to know what they're getting, because there are so many moving parts. For example, there are varying bonus rates, surrender periods, payout rates, and cap rates. Dizzy yet? Well, even if you understand all of the parts, insurers have the right to change certain terms, typically every year.

The deferred-income contract is a variation on the plain immediate annuity, which converts a lump sum to income that begins right away.

When these annuities were first introduced, they were billed as longevity insurance and targeted to 60-something investors who wanted to turn on a income stream at a later age -- say, 80 -- to remove the risk of ever outliving the invested assets.

But insurers quickly learned that these products also appeal to a younger investor. Last year, New York Life lowered its minimum investment from $10,000 to $5,000, and tweaked the product line to enable flexible premiums, meaning you can contribute assets occasionally to your annuity, rather than putting up a lump sum.

ACADEMICS AND ECONOMISTS tout income annuities as unbeatable by a simple laddered bond portfolio. (Of course, with the laddered bonds, the investor keeps the principal invested; with the annuity, he surrenders that principal when the income begins.)

Michael Edesess, an economist, found in a 2012 study that income annuities can be especially advantageous during periods of rising interest rates. Using 2012 rates, he compared how long income would last if a 65-year-old man put $100,000 in a 30-year bond versus an income annuity. If interest rates stay the same, the bond income would continue for 30 years. If rates rise by two percentage points -- which still would be a 40-year low prior to 2008 -- the bond income would dry up after 21 years. That's because as rates go up, the value of the bond goes down and investors must sell more to generate the same income.

The longer an investor defers taking payments from an income annuity, the higher the payments will be, because insurers have a longer period in which to invest the assets. For a 50-year-old looking at one of these, insurance companies calculate the benefit using an internal rate of return of 4.5% or higher.

But it's the certainty of income that is the biggest attraction. It can help prevent having to take withdrawals from your portfolio during market downturns, and makes it easier to deal with the biggest challenge to retirement planning: You have no idea how long you're going to need to make your assets last.

The life expectancies of a 65-year-old husband and wife are 85 and 88, respectively, according to the Society of Actuaries. But what if one lived until, say, 95? There is only an 18% chance of that happening, but should the couple plan their withdrawals from their investment plan around this possibility?

If they don't, they're risking a late-life crisis. If they do, they have to take smaller withdrawals to make their assets last, and sacrifice their desired retirement lifestyle, says Wade Pfau, an economist and professor in the Ph.D. financial-planning and retirement-income program at the American College, an accredited school in Bryn Mawr, Pa.

David Litell, director of the retirement-income program, says that he knows first-hand how an income annuity can bring peace of mind.

"My father is 102. When he turned 84, he started to worry that he was going to run out of money and he would eventually get kicked out of his retirement community," Litell says, adding that his father's advisor wanted to take his money out of stocks and put it in a bond portfolio. "Instead, he bought an income annuity specifically to pay the retirement-home bill. He transformed from not sleeping well to not having a worry," he says.

Advisor caution that most investors should never consider putting all -- or even a majority -- of their assets into an income annuity. Assets contributed to an income annuity are highly illiquid, and if you die after payments have begun, the remainder of what you've invested stays in the insurance company's coffers. In essence, this pooling of mortality credits permit insurance companies to transfer wealth from those who die early to those who live longer. Pooling relies on the premise that annuity owners not be able to tap their wealth voluntarily.

While insurers have built some liquidity or flexibility into their contracts, the more flexibility you opt for, the lower your guaranteed income will be.

The best way to use income annuities is in combination with a diversified investment portfolio. What percent of your assets to put in an income annuity will depend on the size of your nest egg, how much you want to leave to your heirs, your health, and your family's longevity history.

In fact, with some of your future retirement income needs assured by an annuity, you may be able to take more risk with the rest of your investment portfolio to achieve a better rate of return. Or, for those who are risk-averse, buying an annuity takes some risk off the table and may help you toss and turn a little less at night.

This is a monthly annuity calculator. It calculates the amount of monthly income you will receive in return for a specific "Investment" (aka Premium). Premium is the purchase amount you pay to the insurance company. With this calculator you can also find what Premium would be necessary in order to receive a specific monthly income amount. To use the annuity calculator, simply select your age, state, and gender. Enter a dollar amount in only one of the two boxes labeled "Investment" or "Monthly Income." Then, choose an income start date. Click "Calculate" and you will see a table with annuity quotes. Feel free to call 800-872-6684 if you have any questions about annuities or your quotes.