How a Fixed Index Annuity Guarantees Inflation-Protected Income in Retirement 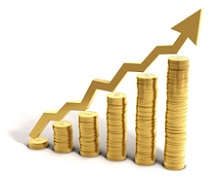 One of the single greatest fears current retirees face is the prospect of outliving their retirement income and savings.

One popular strategy to help stretch a retiree’s income during retirement is known as Bengen's Four-Percent (4%) Drawdown Rule. The premise, born in 1994, contends that retirees can safely withdraw 4% from a balanced stock (50%) and bond (50%) portfolio for 30 years while annually raising the withdrawal for inflation adjustments. By limiting annual withdrawals from a retirement portfolio to less than 4%, this theory suggests that a retirement portfolio should produce income over the course of an individual’s lifetime. While this concept has become the practicing standard of many financial professionals over the past two decades, it isn’t entirely foolproof.

In 2008, Nobel Laureate William Sharpe reported that the 4% Rule isn’t without flaws. If the current economic climate was considered in the equation, approximately 57% of today’s retirees would be at-risk for outliving their assets.

Fast forward to 2013 and this may no longer be the answer for new retirees. In two white papers by Dr. Wade Pfau “Breaking Free from the Safe Withdrawal Rate Paradigm: Extending the Efficient Frontier for Retirement Income” and “Mitigating the Four Major Risks of Sustainable Inflation-Adjusted Retirement Income” the case is made that the 4% rule may need to be adjusted for today’s interest rate environment.

This is a table illustrating today's top interest rates for fixed index annuities. The table lists the name of the insurance company, years that surrender charges would apply, and the premium bonus, if any. To learn more about deferred annuities click any line in the chart or call 800-872-6684 for quick answers.

Dr. Pfau plotted 1001 different financial product allocations, evaluating what the likely end value of each mix would be and the probability of the asset producing sustainable income for life. Surprisingly, the study’s findings suggested the traditional mix of stocks and bonds produced one of the poorest levels of results. The combination found to produce the best results was comprised of traditional stocks and fixed SPIAs (Single Premium Immediate Annuities ). Pfau’s second study further examined fixed income annuities, focusing particular attention to those offering fixed indexed components. This paper’s findings suggest that fixed index annuities (FIAs) produce the best outcomes in terms of ongoing income and longevity protection for current and future retirees. Pfau concludes that a portfolio utilizing the 4% rule has a high probability to fail but through changing the bond portion to a fixed index annuity and a 30-year inflation income rider of 4%, there’s a high chance of success. (See examples of fixed index annuities in the table below.)

The reason for Pfau's conclusions are that while traditional stocks and bonds have provided strong returns over time in previous decades, the current era’s market volatility has weakened actual annual portfolio performances. To help mitigate the potential eroding power of inflation, products such as fixed indexed annuities with inflation protection added should be considered by current and future retirees.

Addendum:
In a review by Dr. Michael Finke, Dr. Wade Pfau and David Blanchett titled "The 4 Percent Rule is Not Safe in a Low-Yield World" by utilizing the U.S. economic climate in 21st century for their analysis (as opposed to Bengen’s 20th century historical data), these researchers found the 4% rule has a 57% failure rate.